Quadrant Capital Group LLC lifted its stake in shares of NovoCure Limited (NASDAQ:NVCR – Get Rating) by 175.7% during the first quarter, according to the company in its most recent 13F filing with the SEC. The firm owned 601 shares of the medical equipment provider’s stock after purchasing an additional 383 shares during the quarter. Quadrant Capital Group LLC’s holdings in NovoCure were worth $50,000 as of its most recent SEC filing.

NovoCure (NASDAQ:NVCR – Get Rating) last issued its earnings results on Thursday, July 28th. The medical equipment provider reported ($0.23) earnings per share for the quarter, missing the consensus estimate of ($0.14) by ($0.09). The company had revenue of $140.90 million for the quarter, compared to analysts’ expectations of $135.13 million. NovoCure had a negative net margin of 12.52% and a negative return on equity of 16.04%. The company’s revenue was up 5.5% compared to the same quarter last year. During the same quarter in the prior year, the company earned ($0.14) earnings per share. Equities analysts predict that NovoCure Limited will post -0.89 earnings per share for the current fiscal year.

NovoCure Limited, an oncology company, engages in the development, manufacture, and commercialization of tumor treating fields (TTFields) devices for the treatment of solid tumor cancers in the United States, Europe, the Middle East, Africa, Japan, and Greater China. Its TTFields devices include Optune for the treatment of glioblastoma; and Optune Lua for the treatment of malignant pleural mesothelioma. 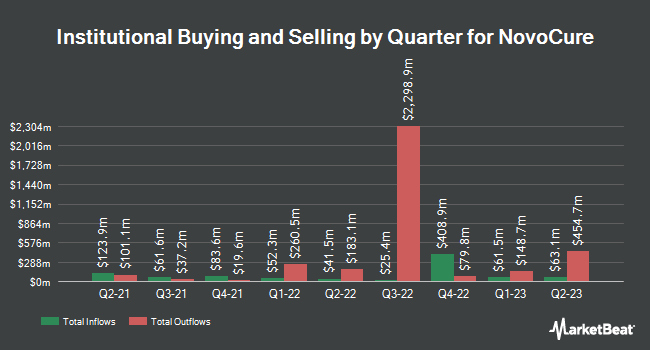 Receive News & Ratings for NovoCure Daily – Enter your email address below to receive a concise daily summary of the latest news and analysts’ ratings for NovoCure and related companies with MarketBeat.com’s FREE daily email newsletter.