Sales of counterfeit goods are taking off after the pandemic.

Many customers in their 20s and 30s find the knockoffs via social media. Sellers post photos of fake goods with captions, that read “Cha(nel) bag” or “(Ni)ke shoes.” That’s the key to what they pretend to be, and why they’re so reasonably priced, according to the Korea Intellectual Property Office (KIPO). 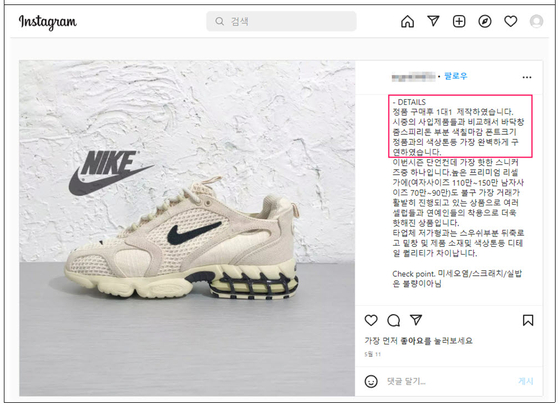 Social media is good for posting photos and communicating with potential customers through direct messages (DM). Social media is also pretty safe from the prying eyes of institutions that try to crack down on counterfeit sales, like the KIPO.

Most customers know full well these are not genuine branded products. But there are some cases of customers being fooled, although the price should have been a tip-off.

“I found out there was a hashtag saying the product is a replica (#replica) when looking at the post again after buying the product,” said a customer who works at a research institute.

“I complained to the seller afterward but they said they never advertised it as an actual designer product and that a refund for a simple change of mind is not possible.” 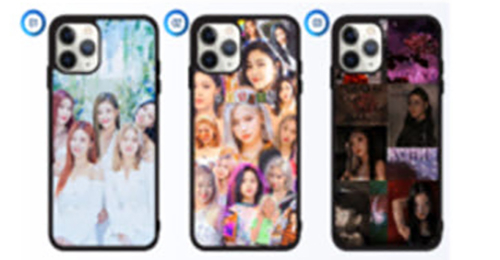 Online posts offering knockoff products on online marketplaces, portals and on social media increased by 35.6 percent in 2021 compared to the previous year, from 126,542 cases to 171,606, according to the KIPO.

Social media accounted for 44.8 percent of the cases followed by 27.9 percent for online marketplaces and 27.8 percent for shopping done through internet portals. 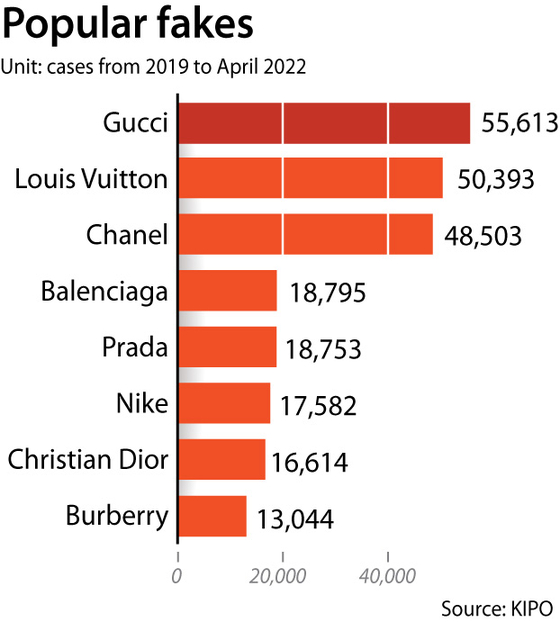 By brands, Gucci, Louis Vuitton and Chanel were the most popular. According to the KIPO, a total of 690 registered trademarks were infringed from 2019 to April 2022. Other than branded products, sales of K-pop celebrity knockoff merchandise and sportswear also surged.

The KIPO has also been hunting down online sales of fake sportswear like Son Heung-min’s Tottenham Hotspur uniform, the national football team’s uniform and designer sportswear ahead of the FIFA World Cup Qatar 2022.

“We will strengthen our monitoring of sales of fake goods and plan to launch investigations against people regularly selling counterfeit goods.”