To read the summary of the report, visit the website at
https://www.strategicmarketresearch.com/market-report/green-hydrogen-market

Increasing awareness of the use of green hydrogen as an energy carrier.

Using hydrogen as a fuel results in releasing water vapor and heat, thereby omitting greenhouse gas emissions. Hydrogen fuel cells are also far more efficient in terms of energy output; Coal-based energy generation is about 33 to 35% efficient, whereas hydrogen fuel cells demonstrate nearly 60% efficiency. As per the US Environment and Energy Study Institute (EESI), over 9 million metric tons of hydrogen are produced annually in the US. Through the Clean Transportation Program, the California Energy Commission invests resources to develop 100 public hydrogen stations in California. As per Eurostat, Europe has 228 hydrogen stations, of which 37 were opened to the public in 2021 alone. Thus, with rising awareness and further programs to develop eco-friendly fueling stations, there will be a staggering rise in the demand for green hydrogen.

To get a first-hand overview of the report, Request a Sample at
https://www.strategicmarketresearch.com/request-sample/green-hydrogen-market

Increasing use of nuclear and green hydrogen as fuels.

The use of nuclear and green hydrogen has been increasing. As per the US Environmental Information Administration (EIA), the cost of producing nuclear power is 0.61 cents per kWh, whereas, for fossil fuel-based energy generation, it is 2.29 cents per kWh. As of 2021, nuclear energy-based electricity accounted for approximately 19.7% of total power generation in the US. As per the US Department of Energy, over 10 million tons of green hydrogen should have been produced in 2021. As per the EIA, in 2020, two new nuclear plants have been commissioned for construction in Georgia. Therefore, with increasing capacities for green hydrogen and nuclear power generation, we would see growth in the use of green hydrogen.

Pollution levels have steadily risen since the 1990s, causing more diseases and deaths each year. As per WHO, approximately 99% of the world’s population breathes air containing chemicals beyond WHO limits. Further, the WHO studies show that over 3.8 million deaths occur yearly due to smoke inhalation from unclean fuel (such as wood and coal) stoves. As per WHO, approximately 829,000 people die yearly from diarrhoea due to unsafe water sources, and over 2 billion people live in water-stressed countries. With the need to conserve the environment for future generations, people and companies must take up initiatives, such as using green hydrogen to protect the environment.

Make a Direct Purchase of the latest Green Hydrogen Market Report published in the month of January 2022. Click the below link to initiate the purchase:
https://www.strategicmarketresearch.com/buy-now/green-hydrogen-market

In-depth and Elaborative Segment Analysis of the Green Hydrogen Market Report as per Strategic Market Research:

Before initiating a purchase, make a Pre-order enquiry and get a detailed overview of the content of the report.
https://www.strategicmarketresearch.com/pre-order-enquiry/green-hydrogen-market

By Application, the power generation segment had the highest market share, and the segment is further expected to see growth in the coming years as there is increased adoption of the use of renewable energy sources to produce hydrogen. Renewable hydrogen can be produced by electrolysis that uses electricity from renewable sources. As per the REPowerEU plan, the EU plans to produce and iimport a total of 20 million tons of renewable Hydrogen by 2030. It plans to enact this by using the Hydrogen Energy Network, the European Clean Hydrogen Alliance, and Horizon Europe initiatives.

By Region, Europe dominated the market with over 57% of the market share. This is due to the EU’s commitment to the UN’s climate goals. As mentioned, the REPowerEU plan aims to increase the use of renewable hydrogen. As per Fuel Cells and Hydrogen Joint Undertaking (FCH-JU), in Europe, under the H2ME (Hydrogen Mobility Euro)pe) Program, 8 million kilometers were driven by fuel cell electric vehicles (FCEVs) and decreased more than 1000 tons of carbon dioxide emissions. Further, 49 additional refuelling stations were developed as part of H2ME. Thus, with such developments, we can see the region committed to increased green hydrogen, further enhancing the market for the same.

Key players in the Green Hydrogen market are:

Kindly go through and get access to our comprehensive coverage of myriad number of Energy and Power reports published in the last three months:
https://www.strategicmarketresearch.com/reports/energy-and-power 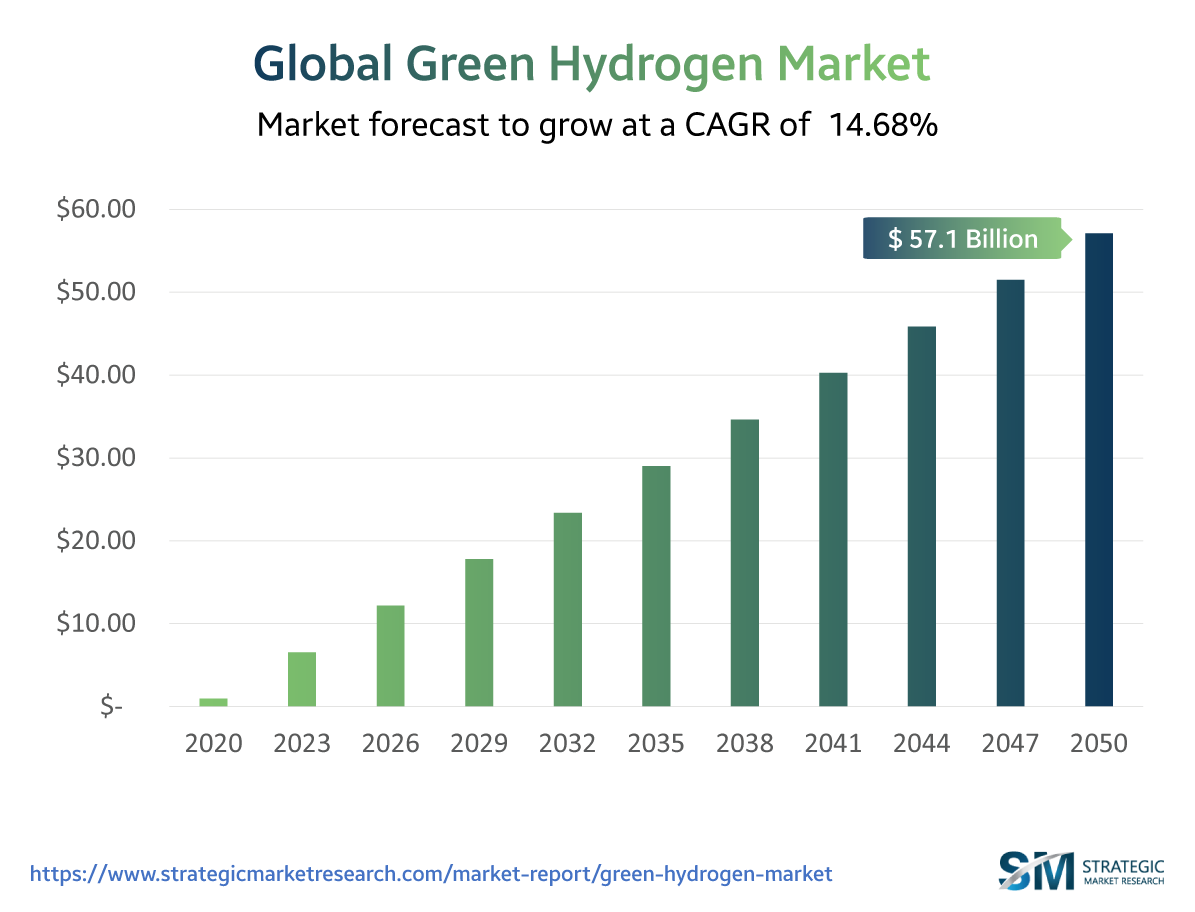 The ‘C-Arms Market’ report is an all-encompassing report developed by SMR which is inclusive of market drivers, SWOT analysis, latest developments, future scope available in the market for current companies and new entrants, and with a CAGR of 4.96% , which would propel the market to a worth of USD 2.6 billion by the year 2030. The market is driven by the increasing number of microsurgeries and higher chronic disease diagnoses. The major players of the industry are Canon Medical Systems Corporation, GE Healthcare, ATON GmbH (Ziehm Imaging, Inc. and OrthoScan, Inc.), C-Arms International, DMS Imaging, Eurocolombus srl, Hologic, Inc., Koninklijke Philips NV, Shimadzu Corporation, and Siemens Healthineers AG.

The ‘Atherectomy Devices Market’ report, as per SMR, is a comprehensive report that includes the drivers, the key opportunities available in the market, and restraints. In the year 2020, the market was worth USD 990 million and had a CAGR of 7.34%, and is expected to attain an approximate value of USD 2.02 billion by 2030. The factors driving the market are the rising number of geriatric patients, increasing demand for minimally invasive surgical procedures and overall advancement of technology in the field. The main companies involved in the sector are Abbott Laboratories, Philips NV, Rex Medical, AngioDynamics, Boston Scientific Corporation, Koninklijke Dickinson and Company (BD Interventional), and Avinger, Inc.

About Us:
Strategic Market Research facilitates the organizations globally in taking pivotal business decisions by furnishing the Syndicated and Customized Research Reports, which are highly precise in terms of market numbers. We believe that every firm, whether it is a startup which is in the introduction stage of the Product Life cycle or an established one which is at the growth stage, requires market research services in order to streamline its key business blueprint. It may be related to Product Launch, Go to Market strategies, Competitive Analysis or new geographical penetration and expansion.