Like audiences around the world, I’ve been spellbound by Top Gun: Maverick this summer. I’ve yet to determine whether it’s because of the nostalgic kitsch, a blast of normality delivered via the multiplex, a distraction from a horrendous news cycle, or a cocktail of the three. Also, like audiences around the world, the use of Kenny Loggins’ classic song early in the film inspired me to revisit the original Top Gun.

Listen to her howlin’ roar

Beggin’ you to touch and go

Highway to the Danger Zone

Ride into the Danger Zone”

Unsurprisingly, I found that I still love the original movie. What was surprising was linking memorable quotes immediately and moments to global fixed-income markets in 2022.

This introduction reads like a stretch but hear me out! Read those lyrics. “Revvin’ up your engine, listen to her howlin’ roar” is a metaphor for the past two years of coordinated monetary and fiscal stimulus meeting a healthy consumer balance sheet. “Metal under tension, beggin’ you to touch and go” is the resulting inflationary environment and central banks’ informal approach to engineering some type of unwinding or landing. From that perspective, one can envision fixed-income investors as heading towards a “danger zone,” shaken and not thinking clearly after all that g-force. But is that really the case? Let’s buzz the tower of the US, UK, and Eurozone fixed-income markets in more detail.

It has been an awful first half of 2022 for bond investors of every stripe. As illustrated in the chart below, the entire US yield curve has repriced to a generational extent. While short term yields are tracking the Fed Funds rate and have risen by about 110 basis points (bps) year to date, the front end of the curve has seen one- and five-year yields jump by 238 and 199 bps, respectively. The benchmark 10-year and long bond are “only” up 168 bps and 140 bps respectively through June 27, although the higher duration magnifies those relatively lower moves. Those figures understate the volatility seen in the market over the past several weeks, as the 10-year yield spiked 73 bps from 2.75% to an intraday high of 3.48% on June 14.

Along the same lines, issuance of new debt is down year over year according to the Securities Industry and Financial Markets Association (SIFMA), with drops of 45% and 23% for mortgage-related and corporate debt, respectively. While Treasury issuance is down slightly from the astronomical levels seen in 2021, issuance is still on pace to be nearly double that seen annually in the decade coming out of the Great Recession (average issuance of $2.25 trillion can be thought of as a hard deck of sorts).

On the one hand, this slowdown in issuance looks like a trend towards normalization. On the other hand, the existing debt needs to go somewhere, either running off over time as the Fed plans or being refinanced at higher rates, as is more likely in the corporate space.

With a high level of uncertainty on the radar over the remainder of 2022 from midterm elections, inflation prints, and remaining Federal Open Market Committee (FOMC) actions, there remain more questions than answers across asset types that have been battered over the first half of the year. 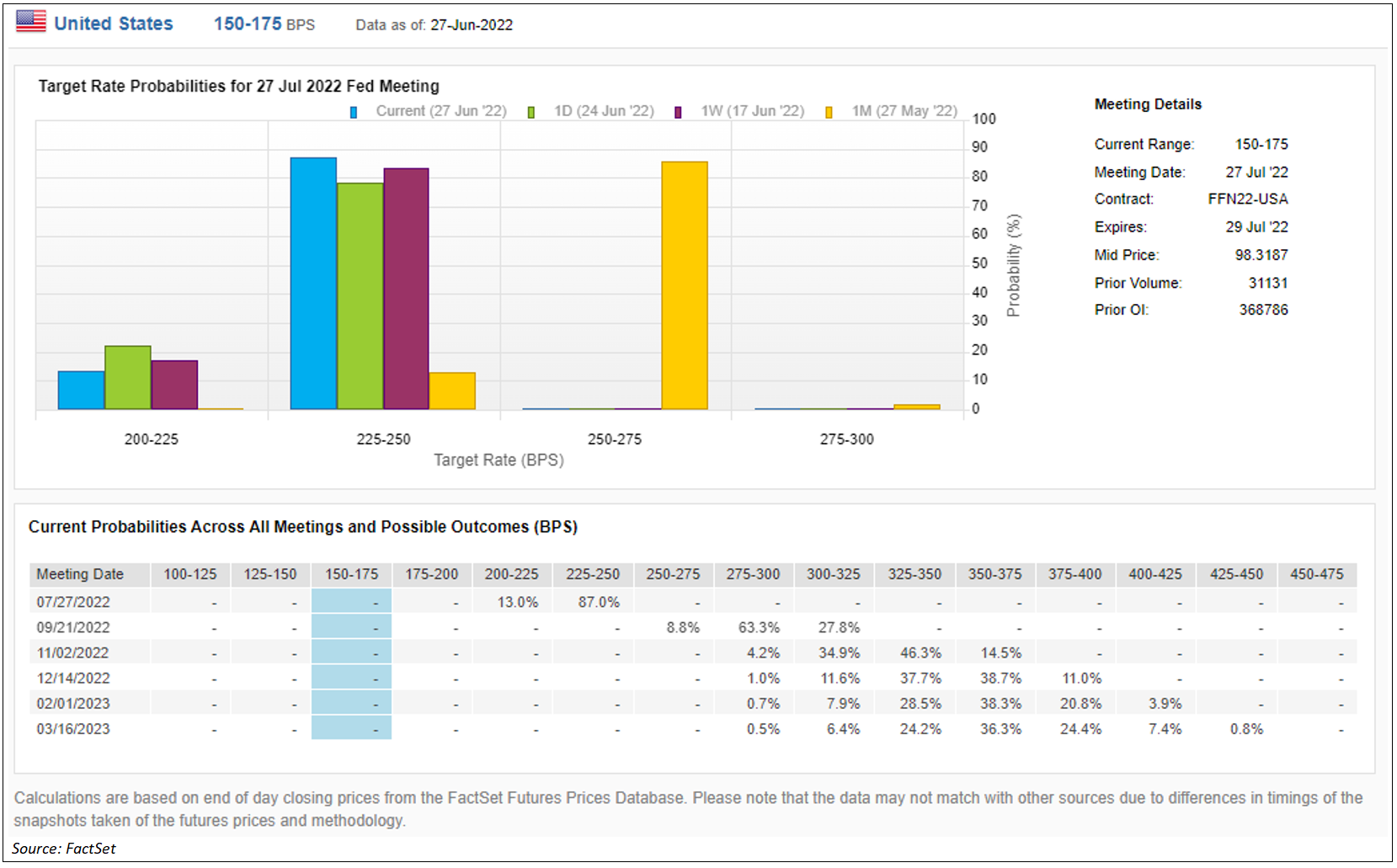 That said, these are mark-to-market losses, where reinvesting coupons and maturities at higher rates via a barbell approach of short and long duration issues instead of pursuing a laddered strategy where term premium is lacking should result in higher income and ultimately buoy realized total return over an intermediate time horizon.

This is an iconic scene that aptly describes the UK economy and fixed-income market. Inflation is spiking even higher than in the US, driven in part by energy volatility. While the Bank of England (BOE) has also started to tighten, rates remain relatively lower than in the US Another important difference is that while the yield curve is flattening in the UK, it has not inverted (yet). A weaker pound could act as a tailwind supporting corporate issuer fundamentals, but with growth approaching stall speed, that tailwind is more of a light breeze.

Consumption is down broadly, as is consumer confidence and the consensus outlook for GDP growth. With inflation running hot in a weakening macroeconomic environment with an uncertain future state, the BOE will need to tread carefully, especially as any search for fiscal policy assistance will most likely go wanting until the inflation picture steadies. 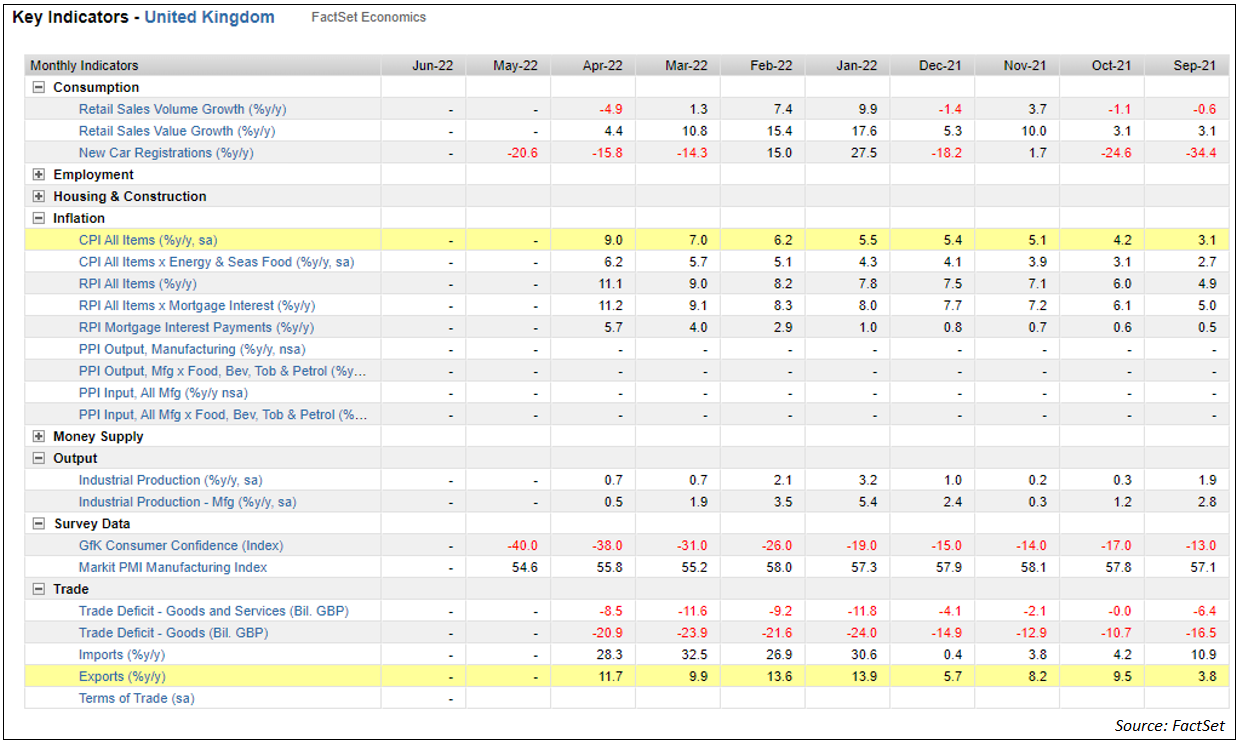 “I Feel the Need, the Need for Speed.” – Maverick

I don’t envy the European Central Bank (ECB). Balancing a slowing economy, a consumer confidence cliff, and a humanitarian crisis that continues to unfold in real time against a single mandate of price stability means something has to give. Early June’s decision to begin to hike in July should at least put a floor under the euro, although I can’t help but feel that the ECB should have moved faster after watching the difficulties seen in other developed markets.

Slowing GDP estimates and a mixed employment picture (structural differences aside) magnify systemic risk in peripheral countries. Watching Italian spreads blow out reminds me of the European sovereign debt crisis that peaked with Greece in 2012. As we saw then, Italy is still “too big to fail,” and I think we are in the early days of this story. It’s a mixed bag, with recessionary pressures looking like a self-fulfilling prophecy at this point. A weak euro and the end of negative interest rates are supportive of income investors, which leaves potential for pockets of strength to emerge.

Maintaining this glacial pace of normalization will be a critical story to follow over the remainder of 2022. The big questions are whether the senior member states tolerate inflation running above trend for an extended period and if/when the ECB steps in to provide a funding mechanism .

So, Where Do Fixed-Income Investors Look?

I think this question is easy to answer, at least right now. There is undoubtedly more pain for investors as pandemic policies are rolled back and central banks are implementing a coordinated hawkish policy.

Investors should shorten duration and sure up credit exposure. Floating-rate notes and asset-backed securities offer increasing income with limited interest-rate risk and an opportunity to customize the risk-return tradeoff. Other asset types that typically perform well in inflationary environments, like real estate investment trusts (REITs), can provide an inflation-linked payout structure. High yield’s widening spreads create appealing entry points; however, proper underwriting of the credit is critical at this stage of the economic cycle. Treasury Inflation-Protected Securities (TIPS) is still worth a look in the US and UK (depending on your macro outlook, reading the central bank tea leaves, and investment mandate). Stronger emerging markets are also worth a look for yield pickup and foreign currency moves depending on your home market.

It’s going to continue to be a tough market for fixed income until we see signs that inflation is finally peaking. As Iceman once said, “Mayday, mayday, Mav’s in trouble!”