FedEx (NYSE: FDX) shares received a boost last week after the package delivery giant impressed investors with better-than-anticipated guidance. Still, the company faces an uncertain future. With the company centrally located in the global economy, fears of a recession have turned many skeptical investors. Meanwhile, the company has also recently transitioned to a new CEO, as its founder has stepped back from direct leadership of the transportation icon.

Does FDX represent a buy, even with the risk that higher interest rates will trigger an eventual downturn?

Late last week, FedEx (FDX) revealed shaky results for its latest quarter. The figures included a weak profit figure, with revenue growth missing projections, despite an 8% rise from last year to a level of $24.4B.

However, FDX saw its shares rally in the wake of the report, thanks to a strong forecast. The stock rose almost 7% on Friday, after the company predicted diluted EPS in a range between $22.45 and $24.45 for fiscal 2023. The target was well above the Street’s forecast of $22.40.

Of the results, FDX CEO Raj Subramaniam stated: “Our fiscal 2022 financial performance was a result of our team’s ability to adapt to a number of unexpected challenges and is a testament to the FedEx value proposition and the execution of our long-term strategy. ”

Subramaniam continued with: “Our foundational investments have set the stage for a strong fiscal 2023.”

Friday’s rally added to gains seen earlier in the month, when the company laid out its plans following the departure of its founder Fred Smith from day-to-day leadership of the firm. FDX also announced a 53% dividend increase.

The financial community views FedEx (FDX) in a bullish light. Seeking Alpha’s compilation of Wall Street opinion shows that 17 of 30 analysts list the stock as a Strong Buy. Additionally, four other analysts have labeled FDX as a Buy, while the remaining nine classify the company as a Hold.

As for price targets, the average sits at $291.58 a share. At the high end, one analyst envisions a target of $342 a share. See a breakdown below: 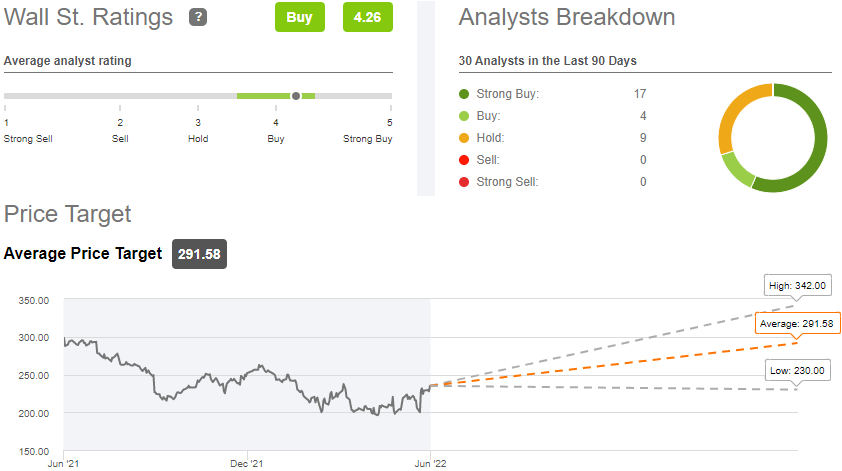 Seeking Alpha’s Meanwhile Quant Ratings present a more speculative picture. The system of grading quantitative measures gives FDX an A+ and A- for profitability and momentum, respectively. However, the Quant Ratings list FDX’s valuation at a C+ and growth as a D+.

For more on the stock’s outlook, see a report from Seeking Alpha contributor Mayank N. Sharma, who has a bullish stance on FDX, saying the growth and fundamentals of the company look very attractive for long-term investors.

However, not all market participants are ready to go all in on FDX. Contributor Dilantha De Silva puts FDX as a Hold. Silva thinks that there’s no hiding from macroeconomic challenges, meaning investors need to monitor FDX to ensure the firm’s new strategy will not end up costing growth.