Fight or flight is a natural survival mechanism. But history tells us that holding through periods of volatility is the best way to compound wealth over time. It’s tempting to fight a bear market by shifting your investment strategy toward whatever is working in the moment, or to sell everything and clear your head.

Here’s why defying instincts is one of the hardest parts of investing, but why it can be an essential quality for patient long-term investors to master.

Drawbacks of the “fight” response

Actively fighting a bear market involves trying to trade your way through volatility by doing things that you normally wouldn’t do, such as rotating out of the worst-performing sectors (like consumer discretionary, communications, and tech) and into sectors that are doing well right now (like energy and utilities), or worrying more about the next quarter than the next five years.

Hedge fund managers may lose clients over a bad quarter. But as an individual investor, all you have to worry about is reaching your long-term financial goals — which takes the pressure off short-term market gyrations and makes it easier to hold through periods of volatility.

There’s a big difference between positioning your portfolio for long-term success and actively fighting a bear market. The former is a worthy exercise, no matter the market cycle.

For example, the long-term investment thesis for a company could change for several reasons. It could have a weak balance sheet, lack positive cash flows, or is making less money, which could force it to take on debt at a higher interest rate. Maybe the company is losing market share to a better-positioned competitor with deeper pockets. Consolidation is a common outcome of economic downturns, as companies with more resources have the means to gobble up smaller companies that are vulnerable to macroeconomic factors.

While an investor shouldn’t overhaul their entire approach just because the stock market is going down, now is definitely a good time to make sure you are invested in companies you understand, in, and that have a good shot at growing for decades to come.

Drawbacks of the “flight” response

For many investors, the growth stock bear market of 2021 and 2022 is the longest bear market of their investing careers. And now that the S&P 500, Nasdaq Composite, Nasdaq 100and the Russell 2000 are all in bear markets (meaning a drawdown of at least 20% from the all-time high), and the Dow Jones Industrial Average is just one percentage point away from a bear market, fears of a prolonged bear market are mounting. 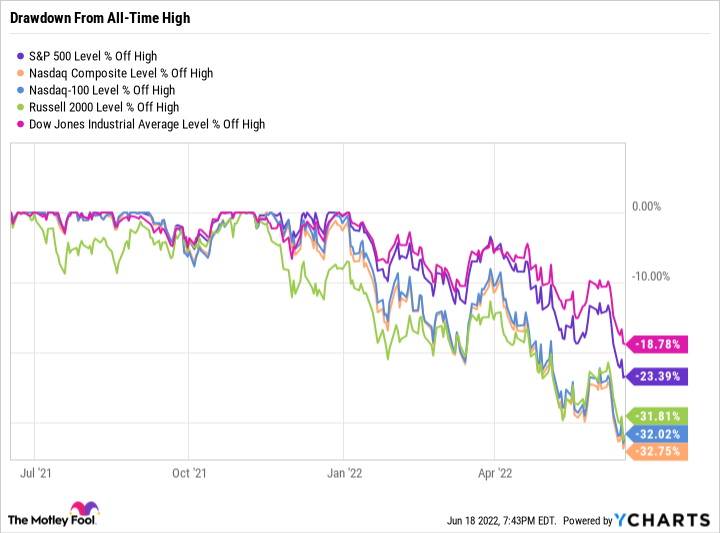 Each passing down day can take a toll on an investor and make the urge to sell and walk away look even more appealing. But history tells us that bear markets can create life-changing buying opportunities for folks who have the patience to ride out the storm.

It’s one thing to look at history and realize that selling during a bear market has so far never been the right long-term move. But when you’re in the thick of one, it helps to have some points to fall back on.

For me, the best approach is to simplify the situation: Does the business have the fundamentals to outlast several quarters of negative economic growth? Is it going to take market share during a recession or lose it? How vulnerable is it to the short-term challenges, and do those challenges affect the long-term investment thesis?

If you go through this exercise enough, chances are enough, you’ll realize that many industry-leading companies look like compelling buys, while many smaller companies whose growth was largely paid capital and rising stock prices that made for easier equity financing are in a precarious position.

The benefits of just standing still

One of the best approaches for most investors could be to pick their favorite name-brand companies and hold them. It’s a beautifully simple strategy that also helps you sleep at night. No matter how bad the sell-off gets, you can rest easy knowing that these large companies have been through a recession before and have often emerged stronger on the other side.

Despite decades of wisdom and access to a limitless treasure trove of information, many investors fail to beat the market mainly because they make a simple mistake, such as fighting or fleeing from a bear market. As difficult as it is to do nothing and just stand still in a bear market, it’s the most effective and simple way to compound wealth over time. Avoiding mistakes like selling an asset at a bargain-bin price are just as important as making good decisions.