The S&P 500 Index closed up 6.33% for the week ending June 24, 2022. For investors, this feels like an enormous win after the market was down -10.93% in the prior two weeks and before this week, the S&P 500 reached bear market territory reaching a level putting the market down over -23% on the year. Investors have faced a high level of market volatility with the year approaching the halfway mark. This week’s 6+% return is the third week this year where the S&P 500 Index generated a return over 6%. There was no week in 2021 that had a return over 6%.

With the S&P 500 Index falling into bear market territory last week, a return down over -20%, both institutional and individual investor bearishness rose as I noted in several earlier posts, here and here. Sentiment around the economy has also reached a high negative level. The University of Michigan Consumer Sentiment reading released Friday fell to a record low of 50.0 for June. Below the chart are several excerpts from the survey release:

Back to the S&P 500 exiting the bear market, the thought becomes has the bear market bottom been reached and what does a recovery look like? In a recent report by Lindsey Bell, chief markets & money strategist for Ally, she highlights data around the economy and a bear market. From an economic perspective, the economy has hit stall speed, even negative growth in the first quarter following a strong 2021. Her article, “How loud will the Market Roar?” Includes a table noting prior bear markets going back to 1946 and nearly half had declines between 20 and 30% and the current bear fell -23.5%. The average return 3-months and 12-months after the bear market ended was 20% and 42%, respectively. 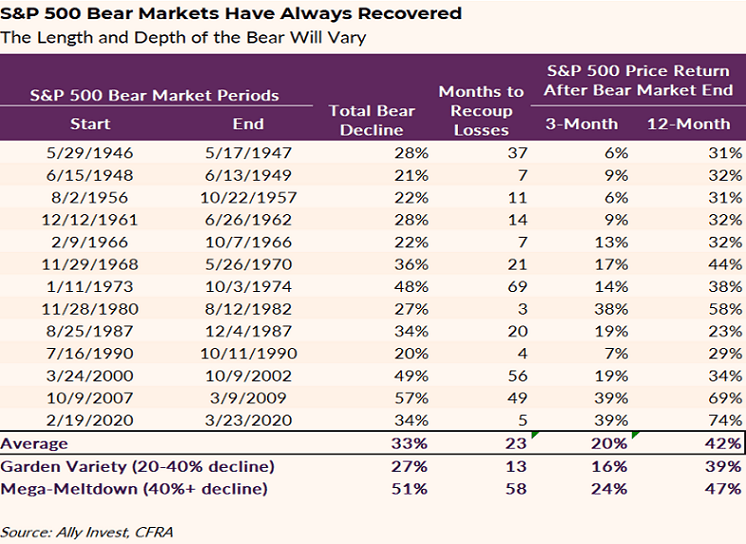 As the above table shows, bear declines can exceed 40% and include intermediate rallies before reaching a bear market bottom. Michael Kantrowitz, CFA, Chief Investment Strategist at Piper Sandler, shows the bear market rallies of 2000/2002 and 2008/2009 in the below charts.

I believe Lindsey Bell summed up the current environment well when she notes in her article,

The good news is that mild recessions [if we do enter a recession] typically feature less severe bear markets. If that’s the case, then the market lows, at least by historical standards, are near. That means now through the next few months could be a great time to invest for those with a time horizon going out several years.

Of course only time can provide the answer, but there are a large number of stocks that are down far more than the broader market itself and investors might find long-term opportunities in some of those companies. Knowing one’s investment time horizon is always critical, but especially in a time like today.

Editor’s Note: The summary bullets for this article were chosen by Seeking Alpha editors.