Consumers are feeling bad, too. The US Index of Consumer Sentiment is at its lowest level since the University of Michigan started the survey back in the 1950s. The survey partly measures how people feel about their personal finances. And if people are feeling bad about their financial situations, then it’s possible discretionary spending could pull back substantially and that would hurt consumer-discretionary businesses.

In short, there’s a lot of negativity and some of it is very well founded. And because of this, people are hesitant to invest in stocks right now. As a result, shares of Wix.com (WIX 4.93%), Zoom Video Communications (ZM 4.22%), Pinterest (PINS 7.89%)and PayPal Holdings (PYPL 5.24%) have fallen to record low valuations. And for investors willing to buck the market’s negativity, these stocks could be screaming bargains to buy for the long haul.

Wix offers a variety of software solutions so that individuals and businesses can create and monetize an online presence. Unsurprisingly, this kind of thing was in hot demand in the early days of the COVID-19 pandemic. Full-year 2020 revenue was up 30% from 2019, and management said in its earnings statement, “We have concluded the most successful year in our company’s history.” Revenue for 2021 was also up sharply with 29% year-over-year top-line growth. However, management only expects 10% to 13% full-year revenue growth in 2022 and this slowing growth rate is partly why the stock is down 83% from its high in 2021.

Wix is ​​growing more slowly at the moment but its customer retention rate is still stellar. The company finished the first quarter of 2022 with 228 million registered users, up from 222 million at the end of 2021. These users often start off using free services and upgrading later, meaning these new users are a source of potential future revenue growth. And its net revenue rate is at 116%, showing its older customers continue to spend more with Wix as well.

Because it continues to win new customers and old customers keep increasing their spend, Wix hasn’t taken its eyes off the prize. It’s facing the challenge of slower growth now. And it’s taking on some temporary higher spend to support its expansion. But by 2025, management expects to generate $2.5 billion in annual revenue, growing at 20% annually, with a free-cash-flow (FCF) margin of 20%.

In recent years, Wix generated a lot of FCF so it’s reasonable to assume it can generate this kind of FCF again. For example, before the pandemic, in 2019, Wix had a FCF margin of nearly 17%.

Wix’s market capitalization is only about $3.5 billion as of this writing. And it trades at its lowest price-to-sales (P/S) valuation ever at 2.8. If it can attain $500 million in annual FCF by 2025 as management hopes, I believe it will be a market-beating investment from today’s valuation. And apparently Wix’s management thinks so, too. After all, it just authorized a stock repurchase plan of $500 million.

2. Zoom: Financially strong and getting stronger

Like Wix, Zoom’s business boomed in the early days of the pandemic. (Zoom’s fiscal 2021 ran from February 2020 through January 2021.) Fiscal 2021 revenue was up 326% compared to fiscal 2020, fueled by the work-from-home trend. But at the midpoint of fiscal 2023 guidance (the current fiscal year), management believes it will grow revenue only 11%, leading some investors to believe Zoom was just a pandemic stock and its relevance is over.

I believe Zoom is as relevant as ever. Its growth rate has slowed substantially, but the company continues to consistently add new customers. As of the most recent quarter, it grew its enterprise customer count 24% year over year to nearly 200,000. And customers continue to spend more over time as its core Meetings product is supplemented by additions in newer products like Phone and Rooms. These factors form the foundation of a solid bullish thissis.

Moreover, Zoom is financially fit with $5.7 billion in cash, equivalents, and marketable securities. And it’s only getting stronger considering its FCF margin in the most recent quarter was nearly 47%. In short, this looks like a company with bright days still ahead.

At one point, Zoom stock had a P/S ratio of over 120. Now, it trades at a price-to-earnings (P/E) valuation of 27. I repeat, Zoom has gone from outrageously valued on a sales basis to reasonably valued on an earnings basis in a span of two years. And this reasonable valuation coupled with an ongoing business opportunity leads me to believe it’s a bargain buy today.

I understand why investors have given up on Pinterest stock and allowed it to tumble roughly 80% from its all-time high. The company’s overall user base has declined in four of the last five quarters. While average revenue per user (ARPU) is up over this time, it generates revenue from displaying ads. And if discretionary consumer spending falls because of inflation, it’s possible advertisers will reduce their spending, especially in 2023 after their up-front commitments for 2022 expire.

With 433 million monthly active users, it’s possible Pinterest will struggle to meaningfully grow from here. And I also concede that the near-term horizon for digital ad spend is cloudy. However, let’s not overlook how powerful this platform is for both consumers and advertisers.

According to the company, 80% of Pinterest users feel positive after engaging with the platform. Whereas other platforms are often places of debate and controversy, Pinterest tries to steer its platform clear of that type of environment. And we could probably all use a little more positivity in our lives.

For advertisers, Pinterest has deep insight into consumer behavior. Each year it publishes a study called Pinterest Predicts, in which it forecasts the research trends that will be hot in the coming year. Last year, it predicted with 80% accuracy. And offering insight like this to its advertisers will likely make the Pinterest platform highly resilient to downturns in the advertising market.

With profits up and stock price down, Pinterest’s valuation has never been more enticing. The stock trades at just 20 times forward earnings estimates.

Finally, there’s financial-technology (fintech) company PayPal — the biggest of these four companies by far. The stock is down 75% from its all-time high, but PayPal’s management didn’t do itself any favors by lowering expectations. At its investor day in February 2021, management set ambitious goals for 2025 of $50 billion in annual revenue, $10 billion in FCF, and 750 million active accounts. But these goals were called into question just one year later and the stock tanked.

In short, PayPal’s management has decided it’s not going to aggressively pursue low-value accounts. This means that in 2022, instead of adding 15 million to 20 million new accounts as originally planned, it only hopes to add 10 million net new accounts. It’s fair to criticize management for shifting gears so quickly. But the silver lining is that it’s consequently lowering marketing spend, which should boost profitability. 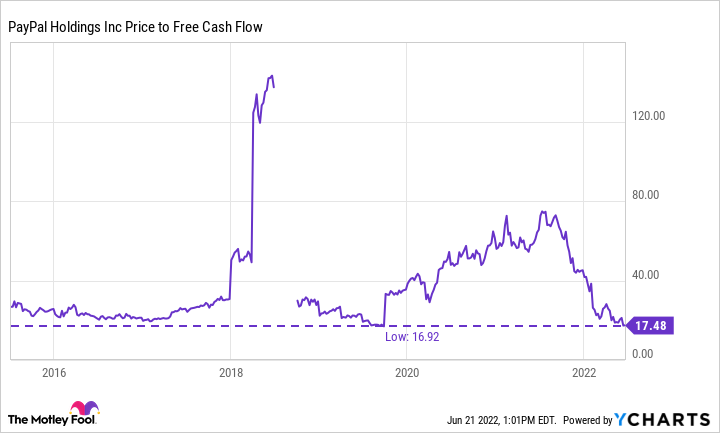 In 2022, the S&P 500 is off to its worst start since 1932 and is currently down 21%. This is quantifiably one of the scariest times to be buying stocks given their rate of decline. But these are the moments that have historically provided some of the greatest buying opportunities. I believe Wix, Zoom, Pinterest, and PayPal could be four of these rare chances to buy shares of exceptional companies at better-than-average prices. Therefore, while it’s reasonable to be nervous, it may be best to put those nerves to rest and invest in hopes of better days ahead.