Also in this series:

Burnaby is considering a bold solution: the creation of its own housing corporation.

Cover the Landscape of Work for The Tyee

We’re looking for a stellar journalist to join our team. Applications open until July 17.

New Opportunities for Early Career Journalists at The Tyee

It’s a rare move as the bulk of municipal housing corporations in BC were formed during the 1960s, when federal funding flowed. Most of their housing was developed up until 1993, when the Chrétien Liberals pulled the federal government out of their responsibility for funding social housing.

If it goes ahead, Burnaby’s municipal housing corporation will be the newest after Tofino’s, which was created five years ago.

Burnaby may not be a vacation destination struggling with affordability for locals like Tofino, but there are increasing concerns that the Metro Vancouver region itself is becoming home to “resort” cities for the wealthy.

As a result, Burnaby Mayor Mike Hurley says “unusual times” need solutions: “Everything has to be on the table.”

“I think we wouldn’t be doing our due diligence if we didn’t look at every opportunity we may have to deliver the housing we need,” he said.

The idea of ​​Burnaby’s own municipal housing corporation was raised by city councillors and staff last November. Staff are now studying different models that would be feasible for the city. They are expected to present them around September for a council vote.

“It’s still got a ways to go,” Hurley said. “But we’re looking at every option. My big concern is that we’re going to lose a generation of people from Burnaby if we don’t start cracking that nut open.”

The city’s director of community planning, Carl Isaak, told The Tyee that staff are on the hunt for the “right model.” There are many roles that a municipal housing corporation could play: acquiring land, getting financing, developing projects, managing units and seeking partnerships.

Tofino, for example, recently offered land to a non-profit developer to build, own and operate the actual housing. This project will offer 35 homes for low-to-middle-income people, due to be completed next year.

Whatever model emerges, Hurley’s hope is for at least 2,000 new homes. He envisions homes for low-income people, for people who work in Burnaby and for young families — maybe “ground-oriented” units with a door that opens right onto a street or courtyard.

For context, about 5,000 tenant households in Burnaby currently live in some form of subsidized housing.

Hurley wants to see homes for those who earn average incomes in addition to those for low-income people.

“I hear from businesses every day that they cannot keep their workforce close to work,” he said, adding that if people live a tiring commute away, there isn’t much incentive to come into Burnaby to work even if they’re paid a little bit more.

As affordable as possible

The whole point of a municipal housing corporation is to get homes as affordable as possible. It helps that an entity without a profit motive, like private landlords, would be able to opt for a break-even model or aim to make a reasonable profit that could be reinvested back into housing provision. But partnerships are crucial too.

Hurley gives the example of the empty lot at 6857-6875 Royal Oak Ave., which has been sitting “shovel ready” for over a year.

The city gave a land lease to a non-profit to develop the project, which would include 134 rental homes. Almost half of them have two or three bedrooms, to ensure that the rentals can accommodate families.

But even with the city offering public land and another $20 million in funding, Hurley says that’s only enough to get the homes renting at market rates.

“That doesn’t make any sense for us,” said Hurley, adding that he’s still hoping for the province will chip in to get those rents even lower.

So far, he’s been told that BC Housing has been “oversubscribed” with funding requests.

“It’s an incredible location,” he said, noting the SkyTrain station that’s just steps away. “We’re baffled ourselves as to why it hasn’t got funding.”

There are a total of five other sites in the city just like this one — with permits all ready to go — that are sitting around because they weren’t approved for provincial funding.

Having an entity like its own municipal housing corporation might make it easier for Burnaby to secure funding.

“To get to the affordable levels that we need, you still need partnerships,” said Hurley.

That’s how most municipalities in BC have been creating new affordable units: through partnerships with non-profits and the co-op sector, says Jill Atkey, the CEO of the BC Non-profit Housing Association.

Burnaby is also looking beyond affordable rentals. One of the models being explored is like Whistler’s, which offers ownership options the city is “very interested” in, said Hurley. Whistler has developed condos that can only be sold to people who work there. 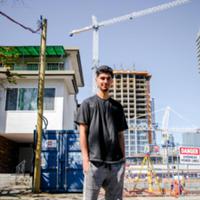 Earlier this year, “NIMBYs” who live nearby came out to criticize a union-developed housing proposal they said was too dense for the city’s official development plan, which was created back in 1999. The proposal included 292 rentals — 146 of them restricted to below-market rents — along with a café, offices and an affordable child care centre.

Burnaby’s council ultimately voted in favor of the proposal.

If a municipal housing corporation is created, Hurley isn’t worried about residents’ pushback on the housing it develops.

“And then they start to think about it, [and say,] ‘It would be great to have my grandkids be able to stay in the city.’

Hot, Hot Housing is a reported column on the housing crisis in Vancouver and beyond, published in The Tyee every Friday. Got housing stories of your own? Whether it’s market hijinks, tenancy horrors or survival tips, you can email us at housing@thetyee.ca.