Listen to this article

Tom Graham, former executive editor of the once vaunted Patuxent Publishing newspapers and a longtime editor of the health section at The Washington Post, died early Wednesday, June 22, at his home in Columbia.

He was attended by his wife, Mary Kay Sigaty, a former member of the Howard County Council, and their children, Eileen and Bridget Graham. It was the couple’s 48th wedding anniversary. Tom had just returned from a recent hospitalization for issues related to his five-year out with cancer.

Tom was born April 7, 1951, in New York City, the second of four children to John and Mary Graham. He spent his childhood in New York City, where he grew up to be a devoted Yankees fan and attended the elite Regis High School, the free-tuition Jesuit school often ranked as the best Catholic high school in the country, with well-known graduates such as Dr. Anthony Fauci.

A major philosophy at Boston College, Tom met his wife and many lifelong friends while still a student. Years later, he would recall a campus protest that featured Mary Kay, a pretty activist with a bullhorn. Upon graduation, the couple married. By then, Tom had found his calling as well as his life partner.

A precocious journalist, Tom left Boston for a work-study position at the Howard County Times in 1971, where he distinguished himself as a reporter, attracting the attention of then Columbia Flyer editor Jean F. Moon, who persuaded him to join the fledgling paper as its news editor in 1973.

Over the next 24 years, he reigned over an ever expanding editorial operation of 13 community newspapers in Howard and Baltimore Counties. Under his leadership, what became the Patuxent Publishing Co. papers were perennial “Best in Show” awardees in the annual Maryland-Delaware-DC Press Association contests. Tom later served as Vice President of the MDDC Board of Directors. 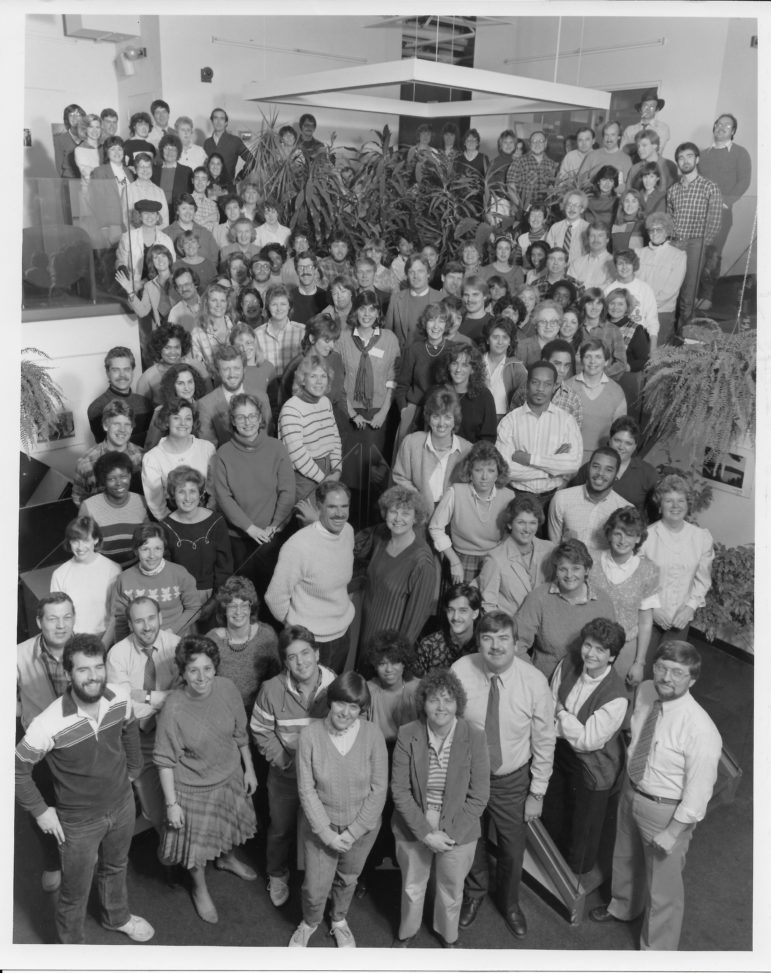 Patuxent Publishing staff sometime in the 1980s in the foyer of the Flier building. Editor Tom Graham is at the very bottom right; Len Lazarick is the second person to his left. In the lower center are Publisher Zeke Orlinsky and General Manager Jean Moon. Photographer unknown.

“In those day, the Flier was truly a great paper. I remember waiting every Thursday for the Flier to be delivered and the pleasure of reading it from cover to cover,” recalled Pat Kennedy, former president of Columbia Association.

In 1983, Tom was selected as the first recipient of the John Hay Whitney Fellowship at the International Herald Tribune, then a daily English-language newspaper published in Paris for readers living abroad. Tom, Mary Kay and new born daughter, Eileen, spent a year in Paris with Tom on the copy desk, editing text from around the globe. The young family, living in an apartment provided along with the job, earned a lifetime of memories, traveling throughout Europe before returning home to Columbia. Daughter Bridget was born in 1986.

Among reporters in the region, Tom was known for his steady, thoughtful and rigorous professionalism. “He was the best editor I ever had,” said award-winning novelist Carrie Brown, one of Tom’s writers in the ’80s.

“Tom is the reason I moved to Columbia from Boston where I had met him at BC,” said Len Lazarick, founding editor of MarylandReporter.com and a managing editor under Tom at Patuxent Publishing. “Tom was a laid-back editor who wrote amazingly clean copy and knew how to cut the fat out of a story. I can’t remember him ever raising his voice – about anything.”

In 1998, Tom left Patuxent and took a position as a multiplatform editor for The Washington Post, where he remained until retirement in 2019. Freed of concerns about being a subject of news while her husband was running the local newspaper, Mary Kay, who had become a well-known craftsperson and artisan, then embarked upon a career that included serving three terms on the Howard County Council from 2006-2018.

For the past two decades, Tom was associated with the World Computer Exchange, which connects youth around the world to digital resources; it was founded by his college friend, Tim Anderson. Tom served as chairman of the WCE board and later as the WCE International Advisory Council Chairman. For years, he personally collected discarded computers from friends for repair and recycling by WCE.

Upon retirement, Tom and Mary Kay bought a truck and fifth wheel trailer and began a series of adventures, traveling across the United States to visit friends and places and events of interest, always staying in campgrounds along the way. Among the highpoints were visits to Florida and a long trip to Chicago. Maine was a favorite destination for family vacations.

His family wants Tom to be remembered for being a supportive husband and father, a loyal friend, and an accomplished journalist who left a mark on his profession and the many editors and writers he mentored.

In addition to his wife of 48 years, Tom is survived by daughters Eileen Graham of Washington, DC, and Bridget Graham (Ryan Bixby) of Federalsburg, MD. He is also survived by brothers Monsignor John Graham and Kevin Graham of the Bronx, and sister Mary Cronk (George Cronk), nephews Brendan Cronk (Paulina Cronk) and Kevin Cronk of New Jersey. He was predeceased by parents John and Mary Graham.

A Celebration of Tom Graham’s life is being planned for later this summer.