To print this article, all you need is to be registered or login on Mondaq.com.

Late last year, the Federal Trade Commission announced that it had reached a settlement with Resident Home, the parent company of Nectar Sleep, and Resident Home’s owner, resolving charges that they made false, misleading, or unsupported claims that their DreamCloud mattresses were made in the United States. As part of the settlement, the defendants agreed to pay $753,000.

In its compliant, the alleged FTC that — even though the company had entered into a consent order in 2018 agreeing to stop making false US-origin claims — Nectar Sleep and its parent company continued to make false US-origin claims about its mattresses . The FTC said that the defendants falsely claimed that their DreamCloud mattresses were “proudly made with 100% USA-made premium quality materials.”

The Commission voted 3-2 to issue the complaint and release the consent order for public comment, but then never finalized the order. Presumably, the settlement was never finalized because, with the FTC having been down to four Commissioners for several months, splitting 2-2 along party lines, the Commission didn’t have the votes to do so. With Alvaro Bedoya being confirmed as the fifth Commissioner in May, the Democrats now have control of the Commission again, and are able to move cases like this forward.

Yesterday, by a 3-2 vote, the Commission announced that it had voted to finalize the order. Commissioners Noah Joshua Phillips and Christine S. Wilson, who voted against the order, issued a dissenting statement, arguing, as they had back in 2021, that he did not believe the FTC had the legal authority to seek the relief that it had obtained in this case. They also said that, “the monetary redress in this settlement far exceeds any injury suffered by those consumers who saw the deceptive statement and purchased a DreamCloud mattress or any reasonable estimate of damages.” The majority issued a joint statement in response, sticking to its position that the relief it obtained in this case was warranted. With a majority taking aggressive positions on enforcement in light of what it calls “extraordinarily demanding conditions,” we should continue to expect to see these kinds of divided votes coming out of the Commission.

It’s important to note, though, that although the Commissioners disagreed on what relief was appropriate in this case, the underlying substantive legal issues were not in dispute. Under the FTC’s Enforcement Policy Statement on US Origin Claims, advertisers should not make unqualified US-origin claims unless their products are “all or virtually all” made in the United States. About a year ago, the FTC also codified this standard in a new “Made in USA Labeling Rule,” which applies to product labeling, mail order catalogs, and mail order promotional materials (which would include websites). 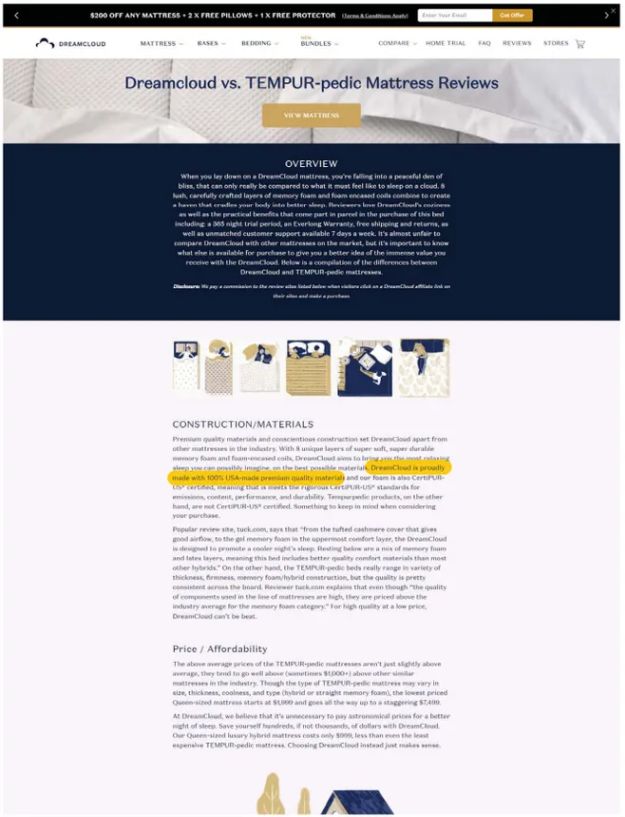 The content of this article is intended to provide a general guide to the subject matter. Specialist advice should be sought about your specific circumstances.

POPULAR ARTICLES ON: Media, Telecoms, IT, Entertainment from United States