No majority, alliances needed
For the first time since 1988, the newly (r)elected French President did not win an absolute majority of seats in the National Assembly. Emmanuel Macron’s supporters won only 245 deputies, below the threshold of 289 to hold an absolute majority and a far cry from the 346 seats held during the previous five-year term. The alliance of left-wing parties (NUPES) becomes the leading opposition force in the Assembly with 131 seats, provided the alliance remains in place. Its leader, Jean-Luc Mélenchon, nevertheless failed in his bid to force an alliance by gaining a majority. He will definitely not be appointed Prime Minister. On the right, Les Républicains (LR) resisted very well by taking 61 seats, which puts them in a very comfortable seat as Macron will probably turn to them to form a majority. The real winner of the elections is Marine Le Pen’s Rassemblement National party, which came out on top in 89 constituencies, gaining 11 times more elected officials than during the previous five-year period.

These results are a disaster for Macron who finds himself in great difficulty in terms of his ability to govern and implement his programme. At this stage, there are several possibilities. Either Macron manages to convince LR to form a majority, which would be more right-wing than Macron’s position. This seems difficult at the moment, as LR is reluctant, but this could change in the next few days, especially depending on the allocation of certain ministries or key positions. Alternatively, Macron could try to get the support of left-wing elected representatives who refused to join the NES alliance, and some right-wing representatives in an effort to form a majority. It is possible that no majority will emerge and that each law will require intense negotiations to obtain ad hoc support. In the context of an economic slowdown (and probably even recession), high inflation and a public deficit of 6.5% of GDP in 2021, this could quickly become unmanageable.
In any event, this is a new era for French politics, which will have to learn to deal with coalitions, agreements and consensus – something that most European countries are used to, but not France.

What is certain is that a reshuffle of the current government will take place. Some ministers have failed to win in their constituencies and will therefore have to leave. This is notably the case for the Minister of Ecology, Amélie de Montchalin, and the Minister of Health, Brigitte Bourguignon. But the reshuffle could go much further in order to satisfy possible partners of a new majority.

Any reform will be difficult to implement
From an economic point of view, the National Assembly’s new composition means that any reform will be very difficult to implement. Little progress can be expected on the most complicated issues, including pensions. Unless, of course, a coalition with the right-wing LR takes place. In that case, we could have more right-wing policies than Macron suggested in the presidential elections, which might be favorable in terms of fiscal consolidation.

On European integration and European affairs, these are the areas where the President has the most leeway and the least need for support from the National Assembly. Clément Beaune, the Secretary of State for European Affairs, narrowly won his seat and will therefore be able to remain in government. In the context of domestic political blocks, Macron may therefore want to devote more energy to diplomacy and Europe.

French bonds: gallic shrug
The reaction in rates markets is likely going to reflect the mixed impact of the election result on a number of policy axes: fiscal consolidation, structural reforms, and European integration. Perhaps the best reason for investors to remain sanguine is that much remains to be decided on how Macron’s party will govern with the support of other party members in parliament. This may seem counterintuitive in an rising rates environment, one where fiscal and debt trajectories will receive increased attention.

As we are fond of repeating, the market context matters. Widening sovereign spreads make sense in an era of policy tightening, especially as the European Central Bank is about to call time on its net sovereign bond purchases. This in turn could unnerve investors who are supposed to replace the central bank as the marginal buyer of French debt. The ECB pre-empted that debate last week by ‘accelerating’ work on a new financial fragmentation facility. Even though French bonds are unlikely to be a direct beneficiary, they have followed the tightening seen in peripheral spreads. 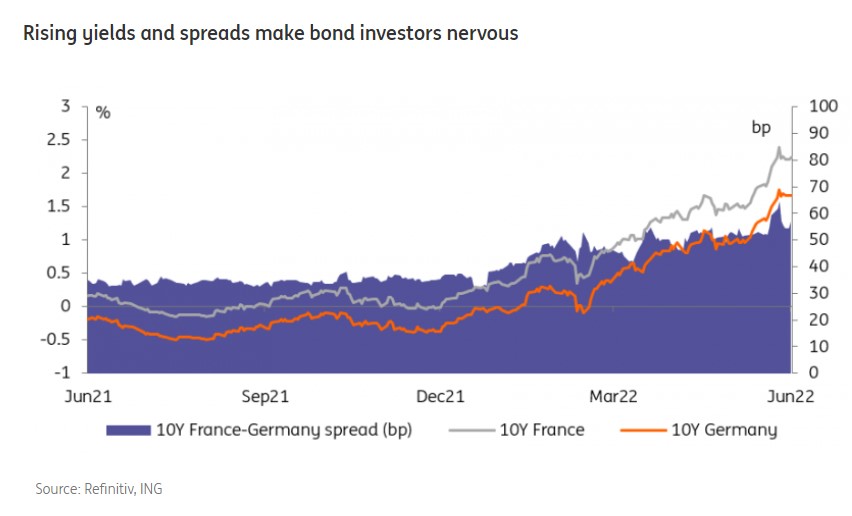 At around 55bp, the spread between 10Y French and German bonds is higher than the QE-era norm (roughly 34bp average since 2015). We suspect political developments will take a back seat over the coming weeks as the new policy direction is ironed out. Instead, the (potentially acrimonious) debate over the design of new ECB instruments will continue to dictate direction. One proposal relayed by Bloomberg last week, for the ECB to sell core bonds (and so potentially French ones) as it buys peripheral ones, illustrates the risks facing French government bonds, so we are reluctant to call for further tightening just yet.

FX: Euro has other concerns
Because it is also a US public holiday today, EUR/USD has barely budged on the news that President Macron’s party has failed to secure a majority in parliament. This may also be because it is too early to conclude how Macron’s government will govern and which alliances can be secured on a policy-by-policy basis. Macron’s loss of an overall majority and the likely struggle ahead to implement his reform agenda looks to be a mild negative for the euro.

Yet the bigger picture of stagflation in Europe has a much larger say in euro pricing. Here, the euro trade-weighted index is barely 1% off the lows of the year – even after this month’s hawkish shift by the ECB. Failure of EUR/USD to gain after the hawkish ECB meeting on 9 June is a reminder that the euro is a pro-cyclical currency, and that tighter policy may damage the euro through the relative growth/equity flow channel.

We expect EUR/USD to continue trading towards the lower end of a 1.02-1.08 range this summer as the Fed pushes ahead with its aggressive tightening cycle.
Source: ING