In the challenging market environment of 2022, it seems as if advisors and investors have scattered to the four corners as they comb the fund landscape for opportunities, or even havens, from rising rates in the US inflation alongside and quantitative tightening.

In the search for non-correlated allocations, emerging markets have become an attractive possibility, but trying to time the risks, particularly within China, has left some investors reticent to engage in the space. That volatility could be peaking sooner than anticipated, and for advisors looking at the next five to seven years, China and EM could be positioned strongly compared to the US

“We may be witnessing many ‘near-peaks’ (on either side of the peak) for many of the risk factors affecting markets, including geopolitical risk, China regulations, US stimulus, earnings downward revisions, rising rates, inflation, and a stronger US dollar,” wrote Anthony Sassine, CFA and senior investment strategist at KraneShares, and Henry Greene, investment strategist at KraneShares, in a recent paper.

“As such, we believe now is a good time to start positioning for the recovery phase when all of this could be unwound,” the authors explained.

Consumer technology has been particularly hard, especially in China, due to the rotation from growth to value that is happening global interest, lockdowns in China and consumer slowdowns, and plummeting Russian assets and higher rates in countries like Taiwan and Korea. This has led to a derating in valuations for assets within consumer technology.

With valuations down so much, as the risk factors potentially peak and sentiment takes an upwards turn, consumer technology could react the strongest to change.

“We believe emerging markets consumer technology companies still represent a massive opportunity due to favorable demographics, low internet penetration, low E-Commerce penetration, increased technology adoption, and rising incomes,” the authors wrote. “We believe the re-rating has been too severe, putting many high-quality and high-growth companies at a multi-year discount.”

So far this year, the KraneShares Emerging Markets Consumer Technology Index ETF (KEMQ)a fund that targets consumer technology within emerging markets, is down -31.27% as of June 3. Due to the fund’s rules and structure, diversification requirements prevented the fund from performing worse because of its limitation on country inclusion (one country can only account for 40% of the fund), with a maximum holding weight of 3.5%.

China was capped at 40% within the fund and was the worst performer from a country perspective within KEMQ. Looking ahead, China’s government appears to be going all-in with stimulus in the form of tax cuts, reduced reserve requirement ratios for banks, infrastructure projects, and local bond issuance. 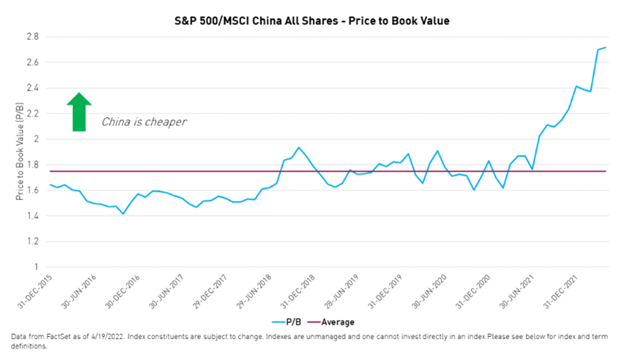 The stimulus, alongside positive rhetoric regarding the regulatory cycle drawing to a close for the platform economy, has generated positive interest from markets. The credit impulse (the nominal GDP growth minus credit growth) and the total social financing were both on the rise in China.

“Historically, recoveries have happened fast, leading investors to focus on fundamentals once again. Emerging markets and China are best positioned from valuation and growth perspectives. The US is expensive and may face slowing growth, especially when compared to last year’s high base, which China experienced in 2021,” the authors explained.

The KraneShares Emerging Markets Consumer Technology ETF (KEMQ), which focuses on internet retail and e-commerce growth in 26 emerging market countries, including China, could be worth a look. The fund has an expense ratio of 0.59% with a fee waiver that expires August 1, 2022.